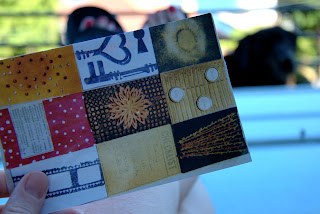 Yay!
This lovely postcard is from Lynn Wigren in Jamestown, NY.  This is the first of the five postcards I will get from fellow participants in Liberate Your Art Postcard Swap.
Thanks Lynn!  I love your beautiful collage on the front of this card and your message on the back.  For Lynn, this collage is part of an ongoing 12 month,  project of creating art based on a chosen word for the year.  Lynn's word is Illuminate!  What a great choice for a personal word for 2011.  I'm so excited to meet a new friend and will be sending her an email to see if she has a blog I can link here.
Can't wait to see what comes next week!!
Posted by Marji at 5:20 PM 4 kind words 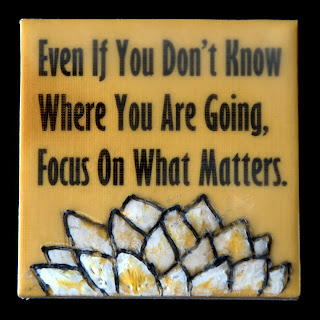 Made this today as a reminder to me.
Posted by Marji at 8:42 AM 1 kind words 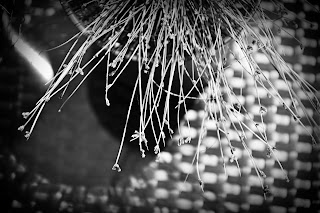 Today I pulled together my second inspiration file.  Its a new file and titled Inspiration 2. Inspiration - the original, was created in January/February of this year.  This is my second time in Kat's class.
I hadn't looked at Inspiration 1 for several months and it was an interesting exercise in an of itself.  None of the original photos from that file made the cut to move on to Inspiration 2.
So, what does this say?
Well, what it says to me is that I have grown as a photographer since then.  My eye has changed but the core things I love were still there only better - thankfully :)
My interests have changed some.  I notice in my current file, there are more black and white photos.  I have a great interest in trying to shoot in black and white and have recently moved to trying to shoot in RAW.
I spoke of capturing photos that show soul.  I thought more on that and all of your lovely comments.  Kat noted that when you shoot things that are your passion or that really interest you, or touch you in some way even if quirky - this is where the magic lies.  Now, it may only speak to you, as the one capturing the moment.  I have certain photos that yes, only a mother would love.  But, to me... they speak.  To others, well... OK, maybe not or maybe not yet. What I'm hoping for, is that armed with this knowledge that I can shoot more meaningful photos. Like the photo above for example.  I LOVE this photo.  To me it speaks volumes about the things I love - nature, texture, light and shadow.
For more on soul in photography, there is a Flickr group called SoulScapes that has some really amazing photos that are invitation only.  Also, if you are not familiar with Jen Lemen - check out her interview and see how photography can make a difference.  If you don't have time to watch the entire video at least watch from the 7 minute mark.  The last 1 minute of her video speaks totally of what we are trying to acheive.
Her blog is HERE
What more can I say?  I think Jen summed it up pretty well.
Posted by Marji at 5:30 PM 7 kind words

Find Your Eye - Round Two I photo for many reasons.  Some are the most obvious:
But really, what I have found lately is that it feeds and nourishes my soul.  This is what draws me to photography.  Maybe this is the obvious that I should have always known.  However, I many have overlooked it for the "obvious" reasons.
I can tell the photos in my library that really reflect my soul.  I'm learning that this is what really makes a great photo.  I know you too can look at other people's photos including your own work and pick out the ones that move you.  These are the photos that show the soul of the person behind the lens.  That person, that artist has found a way to show you what moves her.
I've decided for me, that I am going to try my best to take the shots that reflect my soul.  I want to capture the things that I see that move me.
Its not as easy as it sounds.  Are you up for joining me?  Are you up for the challenge of revealing a little piece of yourself in every photo you take?
Posted by Marji at 5:18 PM 13 kind words I couldn't help but to take this photo as proof that it is true that summer is really eluding us here in Seattle. Yes, that really says 58 degrees Fahrenheit. And... the worst part?  This was taken today at 1PM.  The rest of the world is literally sweltering and here - officially - 78 minutes of summer this year. That is minutes where we have been 80 degrees or over since well, like the beginning of the year.


Yes, I am whining.... I can't help myself. I don't even get to wear sandals or summer clothes for that matter.


Although, as much as I whine and wish for warmer days to play in the sunshine... I don't think I would trade with any of you who live in the HOT cities to the east of me.... unless you live on a beach or a lake :)

Postcards are off to Kat today to participate in the Liberate Your Art postcard swap.  My 5 cards go into the pool and will be sent randomly to 5 people who are also participating.  Within a few weeks I will get 5 cards from 5 different people.  How fun will this be to actually get a card in the mail!?
Will keep you posted as they arrive.  I will highlight them here.
Posted by Marji at 12:51 PM 1 kind words